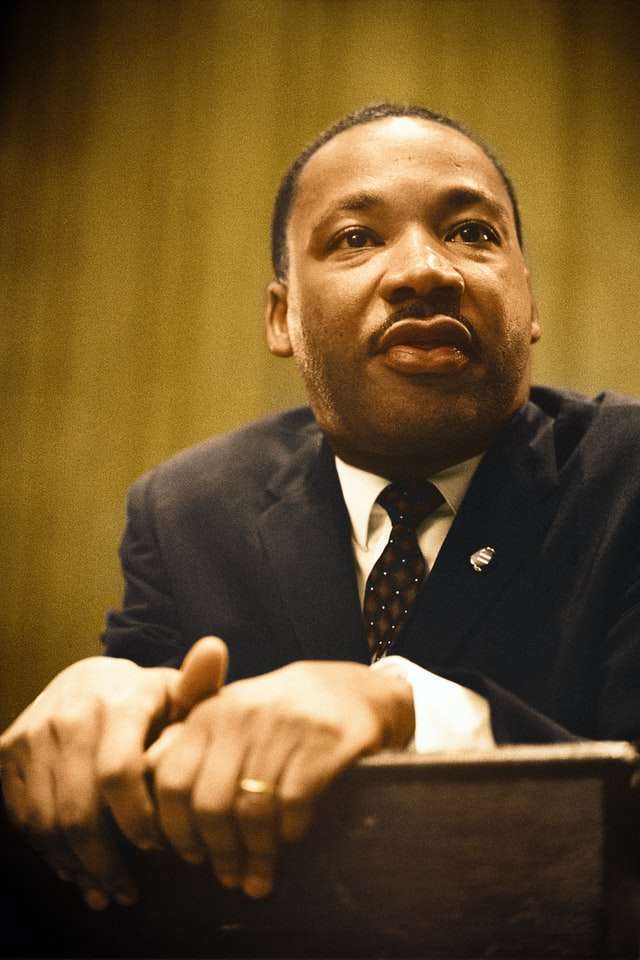 God and Racism- where they will not be judged by the color of their skin, but by the content of their character.

I have a dream that one day in Alabama. Little black boys and black girls will be able to join hands with little white boys. And little white girls as brothers and sisters.” These famous lines are from Dr. Martin Luther King. Jr’s speech, “I have a dream,” delivered in Washington, D.C., gives a clear vision of an ideal society. This is the standard for an organization if it claims God created us equal and discrimination-free towards all its people.

It had been almost three score years since this speech was deliver. Dr. King always wanted to see American society evolve into a racist-free community one day. Unfortunately, even after over half a century, racism has remained one of the deepest-rooted problems in America and the world.

A History of Racism

Racism, in its simplest terms, is the discrimination or discriminatory behavior toward others due to their skin color. The culture one is coming from, the kind of clothing one wears, or even the type of language one speaks. It also includes discrimination due to one’s country of origin, religious beliefs, etc. Several historical examples show The Historical Origins and Development of Racism and how people have faced racism in various forms. One of the most famous examples is whites’ discrimination against.

Black people simply due to their skin color in America and European countries. Another example of racism is anti-Semitism, i.e., the hatred and mistreatment of Jews.

A form of racism that targets people of the Jewish faith. The peak of this anti-Semitism was seen during. The Holocaust instigated by Adolf Hitler. Where millions of Jews were killed in a mass genocide because of their Jewish background[1].

There is no need to peep into history; we can observe our surroundings and easily observe racism happening in some form or another. One is alienated from the playing team if they have different visions, goals, or views about the game or players. One is sidelined from his friends’ circle because he doesn’t agree with some of their opinions and thoughts. Furthermore, one is seen as a unique creature descended from some other planets.

If he puts a long tilak on his forehead as in the Hindu system, has a long beard and white cap as followed in the Muslim community, has a weird kind of turban on the head as wore in Sikh traditions, etc. Suppose a person speaking a different language lives in a particular community having a common foreign language. In that case, that person is make to feel separate from the community on certain occasions. Discrimination of people based on caste, creed, or gender is also visible worldwide.

Just as cancer starts with a small portion in a body and gradually spreads over the entire body taking control of the whole body and eventually leading to the death of the person, similarly, this racism is also as bad as cancer in modern society, ultimately defeating the organization of the purpose and goals for which it is create.

It is says that Man is a social animal and cannot live without society. Still, suppose a man chooses to remain on the platform of animalistic thinking and propensities. In that case, he must live without society as there is no peace, harmony, or happiness in the community of animals. The kind of impact racism leaves on people’s lives is egregious, and specific incidents from people’s lives worldwide are sufficient to show what kind of society we live in. God and Racism

“As a black girl,

I have experienced a lot of pain because of my skin color. Being an Indian Muslim in America, I can say that I have experienced racism and microaggressions quite a few times. I was in elementary school, asking my friend if I could go to her house, when she said, “No, sorry, my dad doesn’t like Indians.” A lot of my childhood friends were nonblack, and I often was made to feel like an outsider with them,” says KJ from Texas[2].

Throughout the years. I have heard multiple “jokes” about all Muslims — or even just brown people in general—being terrorists, says Ridah Shaikh. Lakhwant Singh was working in his suburban Denver liquor store in April 2020 when a man walked in, assaulted him, damaged products, shouted profanity, and yelled, “go back to your country”[2].

Recent researches on racism post-pandemic are more worrying. Asian Americans are more likely than any other group to say they have been subject to slurs or jokes because of their race or ethnicity since the coronavirus outbreak. Sizable shares of Black and Asian adults worry other people might be suspicious of them if they wear a mask in public.

Since the coronavirus outbreak. Most Asian Americans (58%) and 45% of Black Americans say it is more common for people to express racist views toward their group. These are some of the few research results share by the pew research. org[3].

Let’s talk about God and racism. Does God discriminate?

Can God help us to solve racism?

So far, we have discussed God and racism, its origin to some extent, and various incidents. Does God discriminate? Of course not, however, I would like to discuss the root cause of racism from the perspective of religion and God and a simple solution to eradicate it. As it is evident from people’s experience, racism originates from an individual’s bias or prejudice, which stems from his own identity. Self-preservation is the first and fundamental law of nature.

During this process, he creates likes and dislikes because he is the center of the activity. One who agrees with his ideas and views is include in his circle, and the rest he excludes.

When this process expands from person to family to society to community and ultimately to nation, discrimination originates in colossal form, which we call racism. In all these expansions, the aim is one’s self-satisfaction and maintenance of superiority of beliefs, thoughts, and emotions. Let us see what various religious scriptures have to say about racism. Starting with the classic Indian spiritual text, ⁸Bhagavad Gita, Lord Krishna informs that we are⁰ not these bodies but souls, indicating I am not Indian, American, etc.

I do not belong to a particular society, community, family, or even mind. I am pure spirit soul, and part and parcel of God, above all these bodily designations. Since we are not purified, we identify ourselves with body & mind and fight with each other on superficial physical identifications. Verse 5.18 of Bhagavad Gita gives us the vision of an elevated person.

Who has come to this realization of soul. “The humble sage, by true knowledge. Sees with equal vision a learned and gentle brahmana, a cow, an elephant, a dog and a dog-eater [outcaste].

” As per The Bible, Galatians 3:26 Romans 8:14, we are all children of God, and hence we are brothers and sisters. In the holy Quran, in the matter of dealings with other people. The Qur’an says. “Do not let the hatred of others to you make you swerve to do wrong and depart from justice. Be just: that is next to piety.” (Quran Surah Al-Maa’idah, 5:8) That is. Do not let your enmity for your enemies exceed the limits and turn you away from justice in either words or actions. Similar instructions can found in other religious scriptures.

So a careful study of all these scriptures gives us a clear understanding of how to treat other human beings on a level equal to oneself. Free from any discrimination because God created us equal. But someone may question how religion can solve the problem of racism.

When there have been ongoing conflicts between various religious groups. Yes, the answer is correct. This happens when people live with a false conception of the Hindu, Muslim, or Christian God without acknowledging that Sun, although known by different names in various countries, is the same. It equally distributes sunshine to everyone. A rose, by any other name, is still a rose and smells so sweet.

Hence, acknowledging that God is one. And we all are his children, even if this principle is practiced daily, racism from its roots can be ended. If these principles are taught in all schools, colleges, and homes from today onwards.

The issues between God and racism can be completed very quickly. Recently, there has been a great debate on teaching Critical Race Theory in America because some fear that CRT admonishes.

All white people for being oppressors while classifying all black people as hopelessly oppressed victims. Yes, it may happen, but even if it is not taught. People can go to the internet and learn this theory in great detail. Nowadays, social media is much more influential than schools or colleges.

The difference is know to everybody, but discussing the problem will fetch you a different solution. Our government, police, and society can help God help us to some extent. Still, until and unless we do not revolutionize our consciousness and do not make this simple principle deep-conviction in our hearts, the evil of racism will continue in society forever. Unfortunately, we think teaching Science, Math, Engineering, Law, etc., is essential for children.

Still, lessons in practicing humility, tolerance, equal treatment, and justice can not ignored and not practice intolerance.

The height of the illusion is that one knows a person can drive a plane, repair a car or fight a case in court if and only if he has practiced making himself qualified. Still, we expect these saintly qualities to manifest in oneself automatically without practice. If not supported by our elders and leaders, where will they lead us, and will it be a place we will be happy?

Whether it’s a question of the external world or the inner world of human beings. No skill or quality can develop without regular practice and dedication. Since it’s an internal disease of an individual. The solution must come from inside but be encourage and supported by those who want to because we understand the desirability of living in a just society. The preference of living in justice for all, for if not, you could be next to suffer in an untethered world ruled by fear and emotions.

All owe the search and cure of racism not only to those wronged but to we that judge and have the power to affect situations when we do not follow our angels but slip into the human characteristics of anger, fear, blame, and suspicion based on things we heard or told by our leaders leading us to disaster.

We are responsible for the crime of judging a person, and more, judging another unknown person by only what we see and not what is inside them. We need to strive to find out what is inside God’s child, and God created us equal. Not what is outside for all to join in a prejudiced emotional running unchecked without asking for wisdom and universal love to God help us.

Categories: Article, Religions
Tags: God and racism, god is real, god loves you, god with us, My best friend god, the love of god

1 thought on “God and Racism”